I have restarted with my comedy group run by indefatigable Chris Head. We are such a different bunch this time. There are three of us from last autumn but the others are new. Well, they aren't really new, quite the opposite actually. Some of them have done rather a lot of gigs.

For us tyros, it was scary at first. We're just going to end up doing pratfalls and being hauled off with a giant hockey stick. But actually it hasn't been anywhere as bad as that. Maybe we are being too lovey dovey with each other. No one really says anything bad about anyone else. Indeed it's what they don't say that seems far more important. Pauses pregnant with what?

The aim of our group is improve our writing. For tonight we had to talk about five cock ups in your life. I played around with various things like sleepwalking through coal cellars, playing with my father's dum dum bullets that he left around the house (duh?), ending up in an operating theatre in Nairobi supposedly assisting in an operation but fleeing after being asked to identify some very unidentifiable and gruesome part of the body on the table.

No, I let that go and talked about the building of my house. Of course it revolves around the stupidity of the enterprise--if you get the urge to build: don't--and the incompetence of those involved from blithering, useless wife to Teutonic, Marxist architect to builder from Essex (surely no comment required...How many brains do people in Essex have? None, they wouldn't know what to do with them even if they had any.) 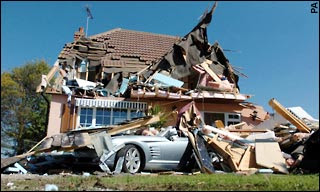 My own role will surely be heroic, honourable, and honesly stupid for ever thinking of doing it in the first place.
Chris_Head comedy open house

Academic, Hopeful said…
Nice one, John. Of course you're the admirable anti-hero! Aren't we all?