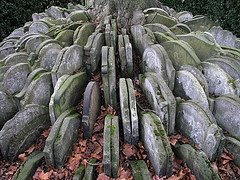 "So: a huge unregulated boom in which almost all the upside went directly into private hands, followed by a gigantic bust in which the losses were socialised." (October 2008)

Joseph Stiglitz also criticized Obama's plan in the New York Times to buy toxic assets for producing the same results as Lanchester's diagnosis. Thus the financialization of daily life and the overproduction of capital have shifted the dynamics of life in ways we were not predicting.

This came to mind when I received an invitation to a workshop by ephemera: theory & politics in organization which is organizing a workshop on the business school and the financial crisis. One claim alleged is that poor business education is in part responsible for our present circumstances. Could the same be said of legal education?

Consider, for example, the editors' blog at the Harvard Business Review, "The Economy: Let's Blame the Lawyers", the gist of which is that lawyers will do all right because (a) they are hated less than bankers, and (b) someone has to sort out and profit from this mess.

One interesting illustration of this thinking is the story of the move by derivatives maven, Dan Cunningham, from Allen & Overy's New York office to Quinn Emanuel, the litigation firm. Cunningham is known for his expertise in structured products and his very close connection with the International Swaps and Derivatives Association (ISDA). When he moved from Cravath in 2001, it was considered a coup for a British firm to recruit someone of his calibre. Now the bottom has dropped out of his particular market niche, the litigators have realised where he can make a direct contribution to their work, even though he is no litigator. Someone has to tell the litigators what these structured products and derivatives are.

Can we see Dan's move as a sign that lawyers are going to come out ahead in these messy times? Unfortunately, I suspect that is going to be an over-optimistic reading of the runes.

Lawyers will not escape culpability for their role in the financial meltdown no matter how much they try to portray themselves as victims. Their role was significant: they enabled these deals to work by creating the documentation that gave the deals legal reality, their legitimation. Each transaction can be perceived as a symbolic universe in which order since this universe is "the matrix of all socially objectivated and subjectively real meanings" (Berger & Luckmann, The Social Construction of Reality 89). Without the lawyers' input the transactions would have been meaningless. As I have suggested before, there is something jesuitical about the lawyer's role.

Of course with all the scorn piled on the bankers there is a tendency to view the lawyer as a kind of underlabourer who merely carried out the tasks assigned. But this is too simplistic a reading. The lawyers were key participants and because of their professional obligations they were supposed to bring a professional ethos, an ethic, to the work. It appears they didn't.

The law firms will soon be in the firing line for their contribution and will be the recipients of writs and lawsuits. It seems the lessons of Enron were not well learned.

But look on the bright side. As teachers of legal ethics, we shall have a wonderful bounty of case studies to pore over and commune with our students about in years to come. Articles will be written and more. With luck legal education may come to respond to what has happened this time and reinforce ethical principles and thinking.

Sadly I see no sign of this occuring in British legal education which leaves ethical training until the last possible moment and at best gives it scant attention. I along with some other sociolegal researchers are now composing our grant application to study ethics in large law firms. I hope the profession responds well to our research. It should do as there are good people in the legal profession who still retain the spirit of professionalism.
bankers ethics law firms lawyers recession

nesh thompson said…
Though I suspect that Lawyers are partially to blame in adding the gloss and believability to toxic business I suspect that the profession will not only suffer little but will be able to defend themselves, as they are trained to do. As long as vitriol is aimed at the banking sector (and I don't think that attention is going to be diverted any time soon) I think they will suffer little repercussion as an industry.

Maybe we will see some lawsuits but the irony is that in pursueing them you need lawyers to do so. Some law firms may suffer but as a result will fuel the rise of others.
18:43

John Flood said…
Clients and customers will be looking for suitable targets to sue. Surely the banks will be first, but their professional advisers will be next, especially if the banks settle. And it will be in their interests to do so. In this respect law firms, accounting firms, and consulting firms will be next. Their insurers will have sufficient incentives to settle rather than fight.

You are right about needing lawyers to sue lawyers. And interestingly one of the legal specialisms that has done very well in the crisis is white collar crime defence. And litigation has risen also.

What I think adds a certain piquancy to this in the UK at least is that the Legal Services Act has shifted the ethical responsibility from the profession to external regulators. This doesn't mean the abandonment of professional ethics; it means that scrutiny is increased. And right at this moment the Law Society is calling for the Solicitors Regulation Authority to create a special division for corporate/City law firms because of their significant differences from the majority High Street/Main Street practices. Corporate law firms may want to argue for lighter touch regulation because of their sophisticated client (hence the argument for the dilution of the conflicts of interests rules) but events may show that naivete can sometimes take on the appearance of sophistication. So my personal belief is that the legal profession will have to face up to its actions.
19:31

Academic, Hopeful said…
From my limited experience, lawyers seem to identify more and more with their clients than with the profession as a whole, and/or at least perceive themselves as victims of broader commercial principles, demands, arrangements.

Also, they seem to be able to justify their choice of clients and work under the umbrella of impartial, neutral professionalism, although I have heard solicitors say that they would like more guidance when it comes to being able to say 'No' to powerful clients.

I will be really interested in the findings and outcomes of your study.
21:26

joetanega said…
Yes, if lawyers are in it, then we're all in it. Although lawyers
22:14

joetanega said…
Although lawyers might need to takes if they are attacked. Reminds me of a story recounted by Damasio in his Looking for Spinoza, where the great philosopher comes out of his neutral patch of heaven, and witnesses a food riot in the Netherlands, butchery and cannibalism (!) Netherlands was the most civilized and legally obedient society at the time...
22:21

John Flood said…
Lawyers do identify with clients but there are costs to be too one-sided. There are still obligations such as being an officer of the court. And one still hears stories of barristers who will put the opposing point if their opponent has clearly missed it!

I think what is happening in the UK, and the Bar won't be immune from this, is the shift from self-regulation via professional ethical codes to external regulation via stricter rules enforced by non-lawyer bodies. Strangely enough this might actually reinforce ethical behaviour, provided they teach it in UK law schools.

Lawyers certainly need to be able to think and conceptualize commercially but it doesn't mean they must abandon principles that have endured for a long time.
02:48