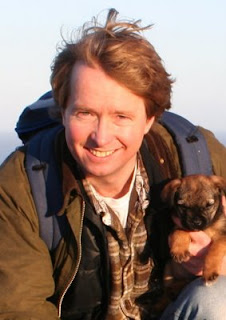 BabyBarista (Tim Kevan)
A barrister turned surfer and writer who has been anonymously writing the BabyBarista blog has finally come into the open as his first BabyBarista book will be coming out in August from Bloomsbury. Tim confesses all in Times Online.

Here's the story of Tim's odyssey.
Tim Kevan IS BabyBarista

Many people are well acquainted with the loveable BabyBarista and have loyally followed his antics through Chambers since he burst onto the scene in February 2007 in his blog. BabyBarista was soon snapped up by The Times Online and he has felt at home on its pages ever since.

Now let us take you back to the beginning – Baby Barista and The Art of War (Bloomsbury) propels this fantastic blog to the next level by bringing its formidable characters to life in one cohesive narrative. Here, Tim Kevan, barrister, author and creator of BabyB talks about his inspiration and the origins of the rookie lawyer.

I started writing BabyBarista in February 2007, having at that stage been practising as a barrister at 1 Temple Gardens for some nine years. It’s a strange thing to say but I discovered that this bold, irreverent and mischievous voice along with a collection of colourful characters had simply jumped into my head and the words started pouring off the page. I wrote it as a blog and was hopeful it might raise a few smiles but in my wildest dreams I hadn’t imagined quite the extraordinary set of circumstances which then unfolded. First The Lawyer Magazine commented “If this is a fictional account it is genius”. I then emailed a few publishers and started getting interest as well as taking on a literary agent who had approached me direct. In the meantime, I was contacted by The Times and they very kindly offered to host the blog and finally, I got a book deal with Bloomsbury Publishing - all within the space of less than three months.

Since that hectic start, it’s been a long haul. I’ve taken a break from the Bar and moved down to North Devon where I’ve been anonymously writing the blog and also finishing the first book in the BabyBarista series. The book’s coming out in August and is called BabyBarista and the Art of War and centres around BabyB’s first year in chambers where he is fighting his fellow pupils for the coveted prize of a permanent tenancy. It’s a fictional caricature of life at the Bar and includes characters that probably exist in most workplaces such as UpTights, OldRuin, BusyBody, Worrier and even JudgeJewellery and her penchant for stealing cheap jewellery. Alongside the pupillage race is an altogether different battle with BabyB’s corrupt pupilmaster whose dishonest fiddling of chambers’ records to avoid a negligence action all starts to unravel and threatens to embroil BabyB’s entire career.

With the first book finished, I’m still very much enjoying writing the blog as well as working on book two in the series.

BabyBarista and The Art of War by Tim Kevan will be published by Bloomsbury in August 2009. Trade paperback, £11.99

For further details of to request an interview with Tim Kevan or BabyB please contact Jude Drake in the Bloomsbury press office: tel: 020 7494 6470 or email: jude.drake@bloomsbury.com
BabyBarista bar barristers