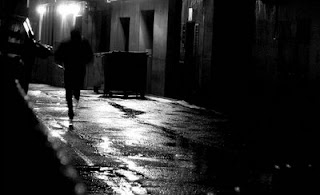 (Thief by The Blackbird)
While grading student essays I came across one that was quite good. It was discussing a legal issue in the UK. I was fine until I came across a sentence that referred to dollars instead of pounds. It was in relation to a particular statute introduced onto the statute book in the 1960s.

I didn't know this statute so I googled it. When I pulled it up there was the sentence with the dollar reference and the fact that the statute was actually American and not British. It was a cut and paste job. Or otherwise plagiarism.

I have written about plagiarism before, especially in relation to Raj Persaud. For me it is the worst offence an academic can commit. I've had my own work plagiarized so I know what it feels like.

Now I felt I had to check the rest of the student's essay. Particular phrases appeared to demonstrate a fluency somewhat beyond what I considered the student's capacity to be. I fed them into google again and found articles and books from Australia, Asia, and the US coming into view.

It could no longer be "accidental" cutting and pasting as the student would subtly change certain phrases. The original might say, "In the US, and other parts of North America, the law states..."; and the student's version would read, "In the UK, and Europe, the law states..." What was clever was the introduction of spurious references that appeared to relate to the statements being plagiarized, but weren't actually mentioned in the original. And of course the plagiarized sections were not referenced in the bibliography.

After I had found five plagiarized sections I stopped. Basta! No more was needed. This was deliberate, wilful plagiarism--inexcusable.

I devote a substantial part of a class to the iniquities of plagiarism. I emphasize that it is an offence nonpareil. But it is one that students or anyone else don't really need to do. In this case the student knew how to cite authorities and could have easily done so in this essay. Indeed, I would have thought more of the essay as the student was showing some diversity in reading material. True, there was the blunder of using an American statute instead of an English one (?), which one might want to put down to tiredness rather than crass stupidity.

Two lessons: don't cheat since it's easy to find out; or, for god's sake, do it well and show some creativity. It's the Don Camillo paradox when you have the devil on one shoulder and the angel on the other. Have a look here.

Anonymous said…
He got careless - I think you should have referred him to the internal disciplinary process.

Admire a man who cheats well but this was clumsy.
02:38

recorta said…
The whole dollars thing was inexcusable on so many levels... Don't people know that plagiarising badly makes them look dimmer than writing a rubbish essay themselves?
19:15

John Flood said…
You're both right. And it proves the adage that it's harder to maintain a lie than tell the truth.
05:40

John Flood said…
My colleague, Avis Whyte, rather knowingly says, "As long as there are seats of learning (and the internet) there will always be plagiarism..."
19:43

Anonymous said…
Such things happened really often in out time. Plagiarism in daily speach, in discussing a legal issue in the UK and the most often at writing work of students, like essay etc. I think the one good way to overcome this ugly deal - to use plagiarism checking service! In my university teachers use PlagTracker.com - http://www.plagtracker.com/ and we know it. It makes us think and write in our own way!
18:35