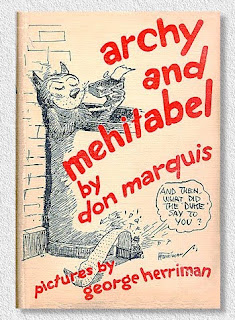 (Thanks to Don Marquis-1933)
Lawyers are worrying about the potential effects of "Tesco Law" when it hits the streets in 2011. Some have predicted that more than 1,000 law firms might be extinguished.

It's important because of a report issued on the fate of Baby Peter who died while under the supervision of Haringey social services department. Social work failed in frontline services and their management.

So what was to be the fate of social work? It's always been one of those categories which some theorists have argued could be a profession or at best a semi-profession. The British government appointed a Social Work Task Force to answer this. Its report was published today.

a call for a reformed system of initial training, together with greater leadership and a strong national voice for the social work profession, led by a college of social work. The report also calls for a single, nationally recognised career structure and a system for forecasting levels of demand for social workers, coupled with clear and binding standards for employers in how frontline social work should be resourced, managed and supported. The Task Force has also recommended a licence to practise system for social workers to acquire and keep up their professional status. In addition to this, improved understanding among the general public, service users, other professionals and the media about the role and purpose of social work, the demands of the job and the contribution social workers make, will be crucial in raising and securing the status of the profession for the future.

As one social worker said on the Today programme: "It's time to raise the profile of social work and reclaim professional identity."

One of the suggestion is to create a Royal College of Social Work like the Royal College of Surgeons. So will it be possible to (re-)create a profession through these measures? There's something manufactured about them that makes me feel very uncertain.

When we look at the histories of professions, their existence seems to be one of tension and struggle with the state. Are they monopolies? Are their practices in the public interest? Do they extract rents? Should they self-regulate?

The answer of the British state is to deprofessionalize and externally regulate where it can--doctors, accountants, university teachers. In this respect lawyers are the last of the tribe to be taken on. And in the case of the Legal Services Act 2007, they didn't realise what hit them. Many still don't.

I don't hold much hope for social workers. But it would pay lawyers to take a moment and look at what has happened to social work and its members. It's very easy to slide down the professional pole; but it is exceedingly hard to climb it.

So let me close with another of archy's maxims, which lawyers might take comfort in:

After receiving many kind comments on our paper, "Professions and Expertise: How Machine Learning and Blockchain Are Redesigning the Landscape of Professional Knowledge and Organisation", I have substantially revised it and put the new version on SSRN . I want to thank in particular Professor Laurel Terry of the Dickinson Law School at Penn State University. I hadn't realised how many convoluted sentences I'd written until she pointed them out and she came through with many new sources for me. The paper is extended and deepened. The deepening came about through my reading of Harry Collins' work on the sociology of science . He explained how acquiring expertise and knowledge is as much social as it is intellectual. The role of tacit knowledge is deeply embedded in social systems. And it is tacit knowledge that takes us from the idiot savant to the fully fledged member of a knowledge group. I have also included two 3D figures that illustrate knowledge acqu