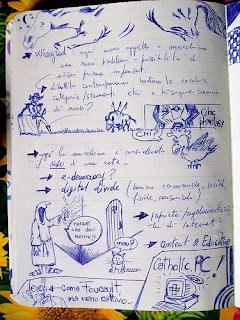 (Thanks to daniele esposito for computer ethics graphic, especially the Catholic PC)

In the light of my editor's comments--and what power editors are able to wield--I have radically revised my paper "From Ethics to Regulation: The Re-Organization and Re-Professionalization of Large Law Firms in the 21st Century". It is available from SSRN.

It has lost most of the history (which is why version 1 is extant), but has gained in analysis of the moves made by large law firms in today's new regulatory world. What comes out is an interesting result that ultimately benefits them yet it doesn't seem to have been the intended consequence.

After lobbying hard for a new or separate form of regulation for large law firms, they received a tepid response from the reviewers set up by the Law Society. Smedley's review suggested a new division of the Solicitors Regulation Authority that would oversee large law firms. So far the SRA has not yelped with delight about this idea. (Since it was suggested the new regulator would have to be hired from the large law firm sector, he would probably have to be paid more than the head of the SRA. You see what I mean.)

The Hunt Review was similarly not enamoured of the idea and formulated the mantra: unified profession at all costs. But despite that, Hunt introduced the AIR. Authorized Internal Regulation, when one examines it, is a new name for self-regulation with some oversight and occasional audit from the SRA. Given the scale of large law firms, this becomes an extension of their current risk analysis practices, ie. something they are already doing.