Canada is Recolonized by Rapacious Brits 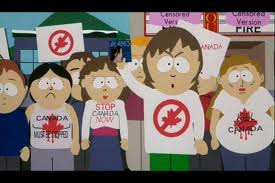 (thanks to ccer.ca)
Jordan Furlong at Law21.ca reports on how Canadian law firms are feeling a chill wind as UK law firms are seeking their prey to merge with (or take over, more likely).

He refers in particular to "the bombshell announcement by UK-based global law firm Norton Rose that it was merging with South Africa’s Deneys Reitz and Canada’s Ogilvy Renault." The pertinent figures here are Norton Rose has nearly 2,000 lawyers and other two have a combined total of 600 lawyers. This is take over.

Furlong's point is that with the UK legal "Big Bang" happening October 2011, there will be a lot more of these takeovers. External investment will give the UK law firms lots of clout, which will be irresistible in lots of ways.

One other point worth noting here is the sudden fascination with Swiss verein structures that law firms like to use--eg. DLA Piper, Norton Rose+DR/OR, Baker & McKenzie, SNR Denton, Squires Sanders + Hammonds. It's something the accounting firms have used for a while. While it's flexible, some think it is a means of avoiding merging fully.

The chairman of K&L Gates, Peter Kalis, refers to these as "Noah's Ark" mergers where they go in two by two or three by three. That is they are cop outs.

We can give this view some credence as Linklaters is about to put its German partners on an equal footing with the UK lockstep partners. Until now they've been capped at 90% of the UK remuneration. And given they are billing more than the Brits, they may be in for some reparations, but I doubt it. And it seems Freshfields has only just done the same.

This makes one wonder to what extent global law firms and mergers are realities or more cases of colonization by UK or US law firms. Who ever has the most cash....
alternative business structures law firms mergers and acquistions