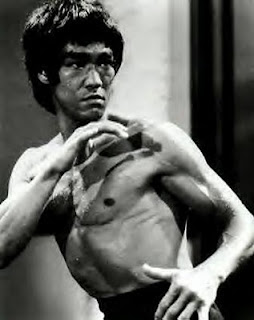 (thanks to unc.edu)
Few know about the other life I lead. After all in Confucian terms--and Bruce Lee was a bit Confucian, wasn't he?--a wise man should be modest. I do read the I Ching. (And if you think this has nothing to do with law, then let me point you to Jack Balkin's [law, Yale] version.

I'm not claiming to be Bruce's reincarnation or anything like that. But I was in one movie with him. Unfortunately, it wasn't one of the originals, it was made in 1980 after the great man's death.

Fist of Fear, Touch of Death (or The Dragon and the Cobra) is about finding Bruce Lee's successor. It contains lots of early footage of Bruce plus other stuff.

If you go down the cast list at IMDb, you'll notice a character:

You see, I'm not making it up. I'm neither at the bottom, nor is the company I'm keeping offensive.

The film, despite what you may think, received rave reviews, although my central role seems to have been inadvertently overlooked. Here's what Watch Kung Fu had to say


This “Brucesploitation” classic was billed as starring the “3 Greatest Masters! Bruce Lee, Fred Williamson, Ron Van Clief”. This is Brucesploitation at its finest (cheesiest) moment and unabashedly pure exploitation schlock. Oh, and yes, it is hysterically, unintentionally funny. Despite what many purists would consider a “disgrace” to the name of Bruce Lee, this film serves as more of a campy action packed tribute, with footage of Bruce artfully spliced into the mix.


Clips from an old Chinese soap opera are re-dubbed to make Bruce’s “biography,” which then introduce a flashback-IN-a-flashback (got that?) about Bruce’s great-grandfather, who was apparently a samurai. The footage for this segment is taken from the “Invincible Super Chan” (a cult classic in its own right – wire tricks, a midget, and some guy with an abacus – yes, a true classic). Who knows what the writer was smoking when he wrote this, but if I had to guess, I would venture some of that golden triangle sticky icky icky (Thai Stick maybe?). No matter, the guy’s a B Movie genius.

You might pick up the implicit reference to Kurosowa's Rashimon, with the flashbacks within flashbacks and samurai in China.

Not all of us are equally gifted, but talent will out...somewhere. Needless to say I'm open to offers although Hollywood can be a drag at times.....
alter ego Bruce Lee films John Flood