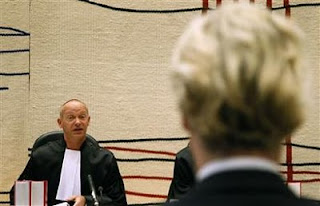 (thanks to reuters)
Last night and this morning I've been to two fascinating seminars on visual and media representation of judges. For those of you who don't know who is the picture above, it's Jan Moors, a judge picked to oversee the trial of Geert Wilders, a right wing member of the Dutch parliament, for hate speech against Muslims. Moors commented on Wilders claim to remain silent and so was ejected from the case.

The first was a lecture by David Sugarman on "The Law Lords, Amnesty International and the Pinochet Case: What Happened and Why?"

Because of Lord Hoffman's failure to recuse himself in the appeal against Pinochet's extradition to Spain, as he was associated with the intervenor, Amnesty International, the House of Lords' decision to extradite was vacated and the appeal reheard. This was the first and last time the court took this decision.

The consequences for the judge, the court, Amnesty, the politicians, and the lawyers were profound. The House of Lords was converted into the Supreme Court some years later. Lord Hoffman resigned before the Supreme Court was formed.

Amnesty International had to account for its apparent move away from impartiality into the political scene.

Perhaps the greatest damage was to the use of law to hold to account former heads of state who commit crimes in their countries for which they believe they have immunity.

This morning it was Researching the Visual Culture of Law. How do we analyze visual data? What is the appropriate methodology?

There were a number of papers on judges that caught my attention, so let me focus on one.

Les Moran has been researching portraits of judges and how diversity is represented in them. (See also Images of Justice.) Taking two judges, Michael Kirby of Australia and Sir Terence Etherton of the UK, both of whom are gay, Moran shows how the ambiguity and ambivalence surrounding the personification of being gay is illustrated in the portraits and photographs of these two judges.

For example, Etherton has no official photograph on on the courts' website, but there is one of him on Birkbeck's website where he is a visiting professor. In the latter on the desk is a photograph (images within images) of him with his partner. It's discreet.

Michael Kirby, however, is a well-illustrated judge as his website demonstrates and doesn't hide the fact that he's gay. But he has inspired some interesting paintings. Take the one below: 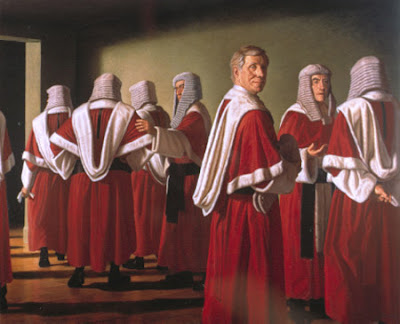 (thanks to national portrait gallery, canberra)
Moran points out a number of interesting features: it's a group portrait not a single person; it's in landscape not portrait; most of the judges' faces are hidden except for Kirby (facing us) and two others in wigs.

When asked for permission to be included in the picture by the artist, Ralph Hiemans, the other High Court judges refused. The two others one sees are dead. Draw your own conclusions on that.

After receiving many kind comments on our paper, "Professions and Expertise: How Machine Learning and Blockchain Are Redesigning the Landscape of Professional Knowledge and Organisation", I have substantially revised it and put the new version on SSRN . I want to thank in particular Professor Laurel Terry of the Dickinson Law School at Penn State University. I hadn't realised how many convoluted sentences I'd written until she pointed them out and she came through with many new sources for me. The paper is extended and deepened. The deepening came about through my reading of Harry Collins' work on the sociology of science . He explained how acquiring expertise and knowledge is as much social as it is intellectual. The role of tacit knowledge is deeply embedded in social systems. And it is tacit knowledge that takes us from the idiot savant to the fully fledged member of a knowledge group. I have also included two 3D figures that illustrate knowledge acqu