We Don't Need Legal Ethics in the UK! 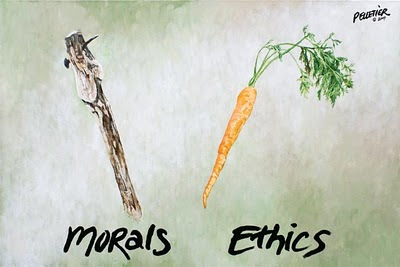 (thanks to joelp.com)
Yesterday I went to a symposium on whether legal ethics should be part of the curriculum. It was organized by Tony King of Clifford Chance. To American readers this will seem a strange event as legal ethics is compulsory in US legal education.

I've lamented before about this gap. A year ago Kim Economides and Justine Rogers were asked by the Law Society to report what ethics training there should be. They concluded that it was an essential part but how it should be implemented was left open.

My colleague, Andy Boon, was asked to come up with ideas on how to take this next step. His draft report lays out some clear directions. He tackles the challenges of undergraduate legal education, issues of morality and law, and the profession's role in regulating the content of a "qualifying" law degree.

How or even whether anything will come of this is an open question. The Law Society, which is sponsoring this, isn't the most forward-thinking of professional organizations. For example, it does or sponsors very little research on the profession, unlike the Bar or the accountants. It's in danger of implementing ideas with little in the way  of evidence to back up what it proposes.

The Law Society supports a Joint Statement by the Bar Council and the Law Society on something they grandly call "The Foundations of Legal Knowledge". These foundations include:

If you were to enquire what research underpins this selection, you would find there is none. Most of it was put together by lawyers sitting around a table and dreaming up a list. Is it the right list? I've no idea.

Now that they are considering ethics as another foundation, the question is what gets dropped or abbreviated. I've argued they should thoroughly research this, especially in the light of the Legal Services Act changes coming through, and start from a blank slate. So far this has been met with utter incomprehension.

The most dismal aspect of this is that the legal profession hasn't come to terms with the fact that the academy controls the entry to the profession. Instead of being antagonistic they need to work with us. Ultimately they will be the losers, and in fact they don't have to be.

The answer is simple. Talk. Fortunately, some in the legal profession understand this and are willing to engage. Maybe we can convince the others....
ethics legal education legal profession