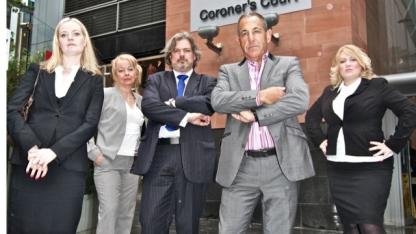 In the wake of the Legal Aid, Sentencing and Punishment of Offenders Act 2012 (LASPO), comes a fly-on-the-wall documentary about a legal aid law firm in the north of England, Tuckers Solicitors.

I came away from this programme both mildly hopeful but also full of despair. The prevailing feeling is of the utter hopelessness of the clients who return time and time again. Whether it's a 63 year old drug dealer or a 29 year old gay man fighting with his 19 year old lover, they continue to repeat their behaviour.

The firm is funded almost entirely by legal aid, which the government is trying to curtail. Tuckers receives about £10 million in legal aid fees. Most of our legal aid goes on criminal cases with very little on civil.

In one remarkable scene the marketing person calls a meeting of the lawyers and paralegals and starts by telling them, "No one's being laid off. You're not here for a bollocking. We need more clients...we need more shoplifters!" Tuckers represents that eternal tension for students of the profession: access to justice and profit making. Indeed the lead lawyer (in the shiny suit above) says, "We're a business. We have to make a profit."

Tuckers is the antithesis of the big City law firm except for one thing. Both have clients who are sophisticated repeat players. The problem is that Tuckers' clients aren't very intelligent hence their recidivism. There are other causes, I'm sure, but the amount of damage that seemed to result from drink and drugs was huge.

Take the client who was caught on CCTV wondering into a jeweller's during the summer's riots. He was out of his mind on booze. It's doubtful he could have stolen anything even if he wanted to. An ex-soldier now homeless, he was the only client who understood to arrive at court wearing a suit and tie.

The 29 year old (above), Tim, who came across as affable and genial, if slightly thick, apparently turned into a wild man when on the booze. At one point Tim has been arrested for drunkenly fighting with his boyfriend (again), and this time he's found in possession of a stolen bus pass and has also kicked in the window of a restaurant. He's admitted half of this to the police and his lawyer coaches him how to say "No comment" to questions. It is pathetic as he parrots her.


When Tim eventually comes out of jail, having exhausted his get out of jail cards, we see him meeting his boyfriend and we know they are about to go off and get pissed and that Tim will be one of Tuckers' mainstays.

Then there are the clients who end up fighting with their lawyers. These are the ones who believe in the "justice" of the system and that "truth" will come out. The results show them how misguided their beliefs are. It's painful.

I suppose, thank god, there are firms like Tuckers because I'm not sure who would represent these clients. Although they committed criminal acts, most weren't criminals in that sense of full mens rea. They were unfortunates, depressed, schizophrenic, homeless, on benefits, constantly in battle with the state and its bureaucracy. Somehow the criminal system is the last part of the state apparatus that should be dealing with them. It can't, it's incapable, underfunded and powerless.

The criminal justice system is expensive and inefficient, or rather it doesn't work. (Look at the Director of Public Prosecutions' machinations over the Paul Chambers Twitter joke trial and appeal for a different yet telling example.) Tuckers' clients need some way of realizing their human potential through work, education, and feeling valued. But they are presented as the lumpen proletariat, completely unsalvageable wrecks of society.

I don't know what the answer is but I know we haven't got it right yet.