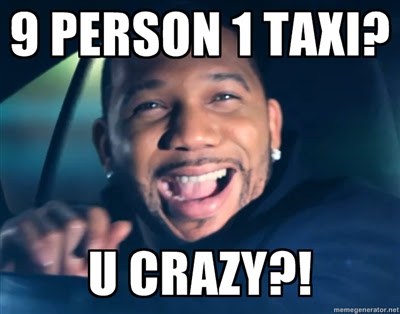 Continuing the cab rank rule compendium, the Criminal Bar Association chairman, Michael Turner QC,* posted some comments today on our report. I'm sure there is merit in them somewhere. But the response is rather emotional.

“We can see no justification for the continuation of the cab rank rule as a rule in the modern, globalized legal services market. By all means the Bar can espouse it as a laudable principle, but it should not pretend that the rule is significant or efficacious.”

How dare they? This is a further demonstration that the LSB is a politically motivated body whose mission is the wholesale destruction of the publically funded criminal Bar.
They then quote our conclusion extensively and close their argument thus

Hundreds of years before anyone even dreamed of outlawing discrimination, the independent  Bar along with the medical profession had enshrined a rule that ensured that every person in need of either legal representation, or medical services could be guaranteed access to the very best. Over hundreds of years this rule has ensured that those accused (rightly or wrongly) of heinous crime have been properly represented. Without the rule many would not have been. The most recent example of why that rule is necessary comes from a country which does not have it, India, where the men accused of the rape and murder of a young girl on a bus have struggled to get representation

The LSB’s analysis of why they say the Cab Rank rule should be replaced is based on such a fundamental misunderstanding that it makes one shudder to think that the regulation of one of the greatest of the liberal professions has been in placed in the hands of those so startlingly ignorant. They argue that the rule is breached on a daily basis because the specialism of chambers means that a Chancery practitioner will not accept a criminal case. This logic beggars belief. Part and parcel of the cab rank rule, is the rule that no barrister will accept a case outside his knowledge and experience. The Chancery practitioner will quite properly re-direct a criminal brief in the direction of those who specialise in criminal law, thereby servicing the client and breaching nothing.

I could write a great deal more on this crassly ignorant analysis of the Cab Rank rule, but there is no need to spell it out. Read it and weep.
Note * According to Michael Turner QC's website--and he's not shy--he is a brilliant, intellectual legal brain with a lot of gravitas. And occasionally he loses the plot.
barristers barristers' clerks cab rank rule legal profession Legal Services Board