The Clerks' Views of the Cab Rank Rule 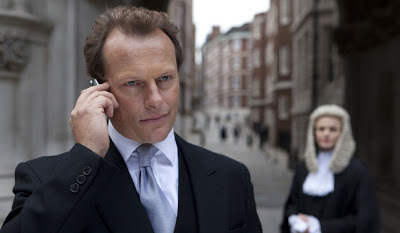 As everyone knows the power behind the throne is the barrister's clerk (like behind every man is a good woman). Billy, above, from Silk may have been a mite too Machiavellian, but he knew how to work his mobile.

The controversy over the cab rank rule grows. Added into the mix was the Bar's move to impose new standard contractual terms on solicitors, which say, that unless they are accepted, the cab rank rule will not apply. This tends to reinforce my view that the cab rank rule is primarily about money rather than nasty people.

There have been two blog posts from clerks on the cab rank rule. Notabarrister titles his post, "The Cab Rank Rule--What is it good for? (Absolutely nothing?)" He explains how and why a clerk deals with the rule and what it means to him. As he says, no clerk wants to turn away work, but there are times. Notabarrister gives a good example of this:


For example I clerk a specialist family set and so if I get a call from a solicitor asking for a barrister for a criminal case I direct them to the specialist criminal set of chambers down the road. The last time any of my guvnors did any criminal work was in the last century and since then various governments have made a few changes to the law. For any of my barristers to act in criminal proceedings would be potentially negligent. Occasionally a situation arises where a junior member of the Bar has been instructed for a case which they consider to be beyond their level of experience and expertise. Again it is perfectly acceptable to refuse instructions for that barrister.

And he discusses the financial aspects of the rule and the deeming and non-deeming of legal aid fees. (See the report for a discussion of these arcane terms.) Notabarrister deals nicely with the exceptions to the rule. His final point sums it up: overhaul the rule and apply it to all lawyers.

The second post comes from Clerkingwell, "Cab Rank -- whose rule is it anyway?" Clerkingwell too identifies the financial aspect as crucial and that the Bar's new standard terms can mean the rule would apply to a shrinking number of cases. His analysis shows a different take on the rule and he concludes it has never been breached. How so?

Looking from a different angle, let’s consider the rigour with which the cab rank rule is observed. The report rightly highlights the lack of any relevant data on this.  I don’t believe any is needed, as I am convinced that it has never, ever been breached.  This may sound surprising, but less so if you look in detail at the rule itself, particulary the broad and hugely subjective exceptions outlined in paragraphs 603-606 of the Code of Conduct.  It’s hard to avoid comparison with the well-know quote from the Life of Brian : “what have the Romans ever done for us ?”

The discretion afforded to any barrister in deciding whether to accept an instruction is so wide as to render the practical application of rule meaningless.  How can you possibly define a breach, much less prove one ? Issues such as availability, expertise and reasonable fees are very much in the eye of the beholder.

It is good to hear some measured and analytical voices in the debate which rumbles on........

charlie gill said…
My Silver Service makes all the arrangements that ascertain you get the courteous, professional, and comfortable ride.
taxi melbourne australia
20:34

charlie gill said…
We always focus to deliver you r order on time and any outstanding issues.
Academic Inside
18:37

charlie gill said…
I asked Gigblast to make a busines logo and I was fulfilled by the activity done and the nature of execution and its conveyance in due time. I really suggest this architect for your future help.
Logo Design
18:38

charlie gill said…
We motivate the essay as soon as possible to make sure you’re fully happy and feel tension free, and don’t feel like anything been mistake.
Services