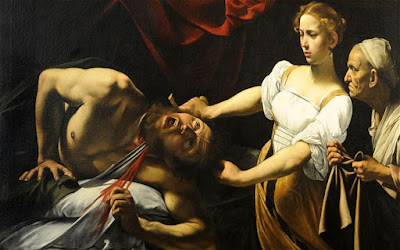 More often than not the sirens of the future predict the demise of Big Law, that the traditional law firm model has run its course, millennials won't work there, general counsel refuse to pay outrageous hourly rates for fat cat partners. The likes of Jordan Furlong, Richard Susskind, George Beaton, and occasionally myself, will tell us why and how the new age of lawyering will be upon us like the anthropocene age.

Are we professional clones of Klaatu in The Day the Earth Stood Still?

The death of Big Law may be premature.

My thoughts on the premature burial opened up on reading Dealbook's article in the New York Times about the rise in mergers and acquisition work in the first half of 2015. Almost 20,000 deals worth $2.2 trillion have been announced in the first half of this year. It's up 40% on the same period in 2014 and is just shy of 2007 levels of $2.3trn.


Bankers and lawyers say that their “pipelines”—their backlog of pending transactions—are more stuffed than ever, claims that are both braggadocio and an acknowledgment of the sheer numbers of companies weighing mergers and acquisitions.

We know from previous economic cycles hubris usually overtakes any caution that existed in recession. So, despite the pitfalls of Grexit and the pricked Chinese bubble (let alone the future prospect of Brexit), the boom is on.

Law firms ride on these waves and The Lawyer has been reporting a steady flow of profit rises for most law firms in the last year. Certainly some firms are shifting resources to nearshoring and outsourcing and introducing various online portals for clients. Most of this is marginal at best.

Law firms also closely align themselves with investment banks who are doing these M&A deals. These alliances go back many years. What then are the figures?

The top four banks doing the biggest M&A deals are Goldman Sachs (31% market share), Morgan Stanley (26%), JPMorgan ((22%), and Bank of America Merrill Lynch (20%). They have the largest and most transactions of the major banks. 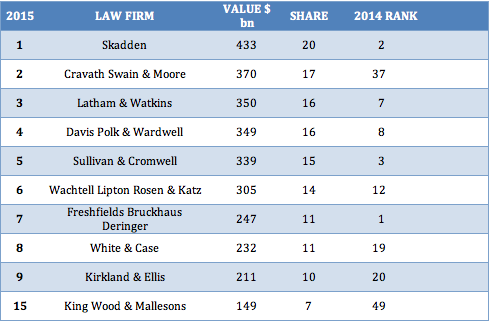 There are few surprises with Skadden, Cravath, Davis Polk, Sullivan, and Wachtell. These firms are renowned for their M&A work. We are, however, seeing the incursion of the outsiders in the guise of Latham (Los Angeles) and Freshfields (London). Both are boosting their New York capacity.

For me the law firm of interest is King Wood & Mallesons rising from number 49 last year to number 15 in 2015. This may be on the back of outward Chinese M&A, but it shows the rise of Chinese law firms in a world dominated by New York and London.

The revenues from this work are significant and will be reflected in profits per partner. What is also significant is the the role of "the dog in the night". There appears to be no barking from general counsel in these deals, no demands for cut price work and the like. Given deals like Royal Dutch Shell's $70 billion takeover of the BG Group, this type of work is of the "bet the house" class. It is perceived as too risky and too valuable to be assigned to a second tier law firm.

As is common with booms and slumps, the upward slope of the cycle induces a form of amnesia that negates the incentives for change and there is a regression to the mean. In this case the mean is business as usual.

Now one could ask about changes in hiring practices and the habits of millennials who won't partake of the partner tournament. If millennials do view careers as portfolios of different jobs then the tournament has lost a critical player. I would argue differently in that the tournament is busted and that it was never a sustainable programme. It contained the seeds of its own self-destruction.

Indeed the death of tournament has played into law firm partners' hands. It is evident, as Bill Henderson and others have shown, that equity partnerships have shrunk over this century and become more elitist and less of a reward. That millennials and Gen Y refuse to play the game only assists law firms in rescaling themselves for the modern era. They have freed themselves from long term commitments equivalent to the Greek pension system.

Am I reading too much into a set of short term figures? I wish I were. But the forces of change in law and legal services are remarkable for their resistance to change and pressures to modernity. We only have to look at the resistance of the Irish legal profession to market liberalisation and new regulation. In four years the Irish bill implementing these changes is yet to emerge from the parliament. And what eventually comes out will be considerably watered down. I would even cast a sceptical eye over British changes and the ability of the legal profession to countermand their spirit.

Perhaps we shouldn't yet gather for a premature burial...

David R Johnston said…
John
You're right. It's not the death of Big Law; it's the boom of Boring Law. They are not mutually exclusive or even a zero sum game.

John Flood said…
It will persist and even thrive. I don't see the momentum for change yet. Having said that with all the complaints about legal services we should be seeing more change.
22:56