Law's Missing Institution (Mind the Gap...) A Manifesto for New Ideas in Law 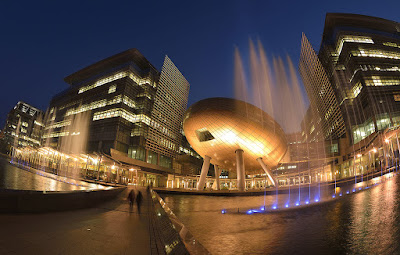 This is a picture of Hong Kong Science Park in the New Territories. It's a tremendous place and I visited it in October while visiting at the University of Hong Kong Faculty of Law. I had gone to see a blockchain startup there, but the visit made me think about why there were no law startups or businesses in the park.

My thoughts here, then, relate to a legal education conference I'm attending at UNSW, an interview on legal education with the Australian Financial Review, and an earlier post on the uberization of law.

Let me start in the mists of time...when the American Bar Foundation was trying to articulate its rationale, the director asked the question: why isn't the ABF the Bell Labs of law? It's a great research institution but it's not Bell Labs, nor should it be. It doesn't create spinoffs and it's not a think tank. But we might need other institutions to take on these roles.

I don't know what to call such an institution, but I can tell you why it's needed and what it should do. We have a massive gap in legal education and it's not purely the fault of law schools. I lay the blame on legal regulators and the judiciary who have virtually no experience in education and therefore should have no role in it. But still they are deferred to whenever the topic of reforming legal education arises.

I should add that what I propose is different from Bill Henderson's idea of a College of Legal Operations, which is based around a series of boot camps to fill gaps. I think there's a much bigger gap to fill and it's not just to do with teaching certain skills although they are necessary.

I would base this new institution in a Science Park, not a downtown office near the law firms. The reason is simple; I want the expertise of people who are dealing with ideas every day, not just those who are in business. They are important...yes.

The new institution must have three roles: first, it must engage in research and development (R&D). Law is terrible at R&D because lawyers and law firms have such short term visions about their work. When it comes to R&D in the cutting edge of law, especially technology and cognitive science and the like, law schools tend to fall behind. The reasons are that they are on the whole narrow minded about their remit, averse to interdisciplinary work unless it falls within a narrow remit, and find it difficult to think in "scientific" ways, which makes the interdisciplinary work difficult. I have reviewed countless numbers of law research grant proposals to American, Australian, Belgian, British, Dutch, and Danish research councils (which means I've forgotten the others). There have been tremendous ideas for research therein, but when they fail, they fail for a particular reason. They can't do methods. Lawyers go all wobbly when they think of methods and it shows. Lots of work to do here.

Second, the new institution must be a think tank. And by this it must engage in public debate and put ideas into the public forum. There are some organisations that do this. For example, UCL's Constitution Unit. But there's no equivalent in law of Brookings or Chatham House, and I suspect this is because lawyers think they have such close connections to power and the state that they simply don't need institutions. They do and so do the public. Policy must be informed by research that challenges conventional wisdom, so we need to go beyond the remits of law reform commissions into areas that potentially don't yet exist but will. Rights for robots is one such area. Will autonomous drones that kill civilians be able to invoke the Geneva Conventions? Caring robots in Japan will want to inherit property and not be switched off. What about land mine detection robots? Can we countenance their injuries? Stupid I'm sure to some, but...

Third, it must teach and impart new skills to law and other graduates for labour markets that will be very different from the closed and monopolistic ones that currently exist. In some ways this bit is close to Bill's college. Ideally though this should be an institution for all levels of the legal market or law, from junior to senior. The senior cadres of law are some of the most restrictive and repressive elements in law. Senior partners in law firms have virtually no incentive to change anything, especially if it involves investment. That means making less money this year...anathema. Admittedly, institutions like Harvard Law School's program for law firm leaders is waking them up but in fact it perpetuates the status quo rather than challenge it. That's not to say law firm leaders don't return home with new ideas, but I have yet to see a law firm truly and really change. Adapt yes, but what if there's a Cambrian explosion?

All three segments of the new institution must cooperate with each other. And, in fact, I'd make the faculty engage in all three sectors.

Some will say I've been on the fringes too long, in wacky programs like Law Without Walls, The Legal Forecast, and Legal Hackers. Certainly I have colleagues who think that way and place me beyond the pale. I disagree of course. We are living in interesting times: blockchain is about to fundamentally change our interactions on the internet; quantum computing will make security an even more hazardous environment; and artificial intelligence is already having deleterious effects on associates' training (or otherwise known as: what training?).

Let me put it the other way. Too many legal academics and lawyers have not ventured into the outerworlds. They are frightened of encountering savages so perhaps a dose of soma is preferable. I'm not sure we can change their minds. If not, then don't waste time. It's time to create new cohorts. But I'm reminded of an earlier story than Brave New World (1932). It's E M Forster's The Machine Stops (1909). In this 12,000 word story Forster shows what happens when people unthinkingly rely on technology to live their lives. It is chilling and prescient. Both Huxley's and Forster's stories are warnings about not facing up to challenge and new ideas; they are stories about conformity versus radicalism. And conformity doesn't come out too well.

For too many years lawyers and the law has enjoyed a monopoly. Has it justified that monopoly. Maybe at times, but not now. Technology is providing us with new ways to create, practice, and consume law, and lawyers don't have to be the only players.

I have a manifesto. I want to break law out of its current antediluvian mindset. Yes, I could move incrementally, but I believe we are in the same position that Europe was in 1848. Revolution is necessary and new institutions are essential to guide the way.

Disclaimers: I own cryptocurrency. I advise blockchain and legal startups. I am a proud Estonian E-resident.

Micheal Alexander said…
Thanks for this. I really like what you've posted here and wish you the best of luck with this blog and thanks for sharing. Fort Lauderdale Family Law Mediator
02:06