Solicitors from Hell Going to Hell? 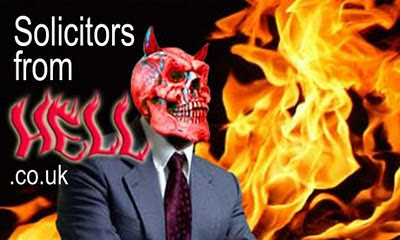 There is no stopping the campaign against Solicitors from Hell. This saga is going to run. According to Mr Justice Tugendhat Rick Kordowski is abusing the process of the court by "seeking to cause the claimants to incur costs which he says they have no prospect of recovering from himself," reports the Law Society Gazette.

Apparently Kordowski has 15 libel suits filed against him by lawyers who are offended at the complaints made by clients against them. Tugendhat said, "He plainly has a grievance against solicitors." He doesn't appear to ask why that may be so. Nor does he accept Kordowski's public interest argument.

It's worth delving behind the public rhetoric. Jon Robson interviewed Kordowski in the Guardian a short while ago. I thought this part was straightforward:

What would he say to the many lawyers appalled, perhaps devastated, by unfounded criticism placed on his site? "Go back to your client, or whoever complained about you, and sort out your differences," he replied.

Why doesn't he vet claims? Kordowski said that he once did try checking with firms before publishing. "Everyone denied the allegations and so I don't do it any more."

I was reminded of a BBC documentary on the TV programme Rough Justice. After the first person had been freed because of a miscarriage of justice, Lord Denning was interviewed saying that journalists shouldn't interfere in the work of the police and courts once the judgment had been rendered. In other words, keep quiet, take your medicine, and don't complain because it's not your place to do so.

Why do I get the feeling that history is beginning to repeat itself?
complaints lawyers Legal Services Act solicitors

Anonymous said…
I entered my story re: Mark Stephen Lomas of 3PB Barristers and Karen Thompson of Lester Aldridge. Now advising and working for the SRA ironically and rather frighteningly being sent in to delinquent law firms. The reason I did so, was to try and help others avoid what happened to me. I believe the website is very important in allowing people like me to warn others. I would have hoped this website would have caused some inward reflection in the behaviour of the named individuals, so we could see an improved legal system. Alas, I am sadly mistaken, as they appear instead to be intent on stopping "free speech". I fight to stay alive every day due to the continuing misdiagnosis in my health situation, which is continuing in an effort to cover up the original fraud, and go to bed every night knowing I may not wake up tomorrow? These people appear to think their reputation more important than my life? I wholeheartedly disagree!
20:44

Family Will and Probate


Hine Solicitors are a specialist law firm situated in 16 different office locations across UK. Our solicitors have a fresh, modern approach to a wide range of legal services including Family, Property, Wills & Probate, Powers of Attorney, Employment, Disputes, Motoring Offence, Inquests, Military Law and Crime. We explain everything clearly in language you understand, and keep you updated so you won’t have to wait for answers. We’re also open about our charges so you always know what to expect.