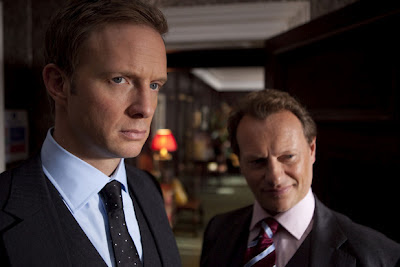 Silk (series 2) ended its run this week with a glance to a subject I'm researching now. The cab rank rule says a barrister represents a client regardless of the barrister's like or dislike of the client.

Martha Costello is defending Jody Farr, a self-admitted smuggler of "high-quality" drugs (not the trash that the police are trying to fit him up with). Moreover, Jody murdered one of Martha's earlier clients, Brendan.

Not only does Martha detest Jody but she dislikes his solicitor, Micky Joy, even more. Micky is true slime. The trouble is Micky is the conduit to plenty of work courtesy of the Farr crime family and Billy, the clerk, is keen to open that fully.

Add on to this that the prosecution is being handled by CW and Clive from chambers (well almost--Shoe Chambers eventually votes CW in).

So poor Martha, beleaguered and distrustful of everyone, valiantly fights the good fight for the client she hates. She hates Jody even more when he tells her how to do the case. Her pupil asks why she's doing it and then she tells him she must for the cab rank rule leaves her no choice.

Well almost...Sections 601 and 602 state the gist of the cab rank rule quite briefly. But sections 603 to 610, in rather more detail, lay out why a barrister should not follow the cab rank rule. There are sensible propositions on expertise and funding, while there are weird ones, eg, whether QCs should be "settling documents if appropriate for a junior" (s.605).

The Bar loves the cab rank rule. For them it underpins the rule of law. Most barristers' clerks find it irrelevant. As one said, "I haven't thought about it for 25 years until you mentioned it."

Does it do anything? No one seems to know. There are no data to show how it works. Does it increase availability of counsel? Maybe where there are so few specialists in a field, eg, pension specialists.

These days everyone specializes so solicitors know who will do what case. Why send a prosecution case to a chambers that only does defence work? Informally who does what is known--formally, it isn't. But then if you use direct access to instruct a barrister the cab rank rule doesn't apply--another exclusion.

It's one of those things that members know but outsiders don't. And indeed it is less to do with the unpopular client because every lawyer wants those--they bring publicity. The main concern is now to do with the size of the fee.

Let me finish with an example from the OJ Simpson trial. When it was thought that a new defence lawyer would have to take over, the candidate proposed an unusual contingency fee. He would only be paid if he lost the case. If he won the publicity would far outmeasure any fee.

Unknown said…
I've never seen that show, but I must say I'm pretty fond of "Garrow's Law". Do you know the series?
06:42