A Judge's Lot is Not a Happy One 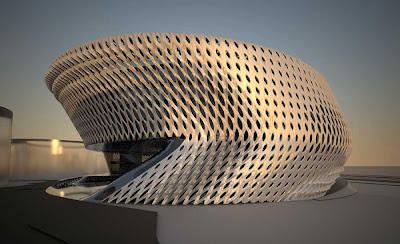 (Madrid Civil Courts of Justice: thanks to e-architect)
To be read to the background of the Supremes "Baby Love", it seems judges' collective noses are getting bent out of shape by politicians lately. (I'm sorry for this but I could not resist.)

Lord Phillips, president of the UK Supreme Court, has been complaining that because he has to negotiate his budget with the Ministry of Justice the court's independence is being reduced. Actually along with every other institution in the UK, the Supreme Court is being asked to take its share. Lord Phillips doesn't like it. But as Head of Legal, Carl Gardner, pithily puts it: Tough luck. Lord Phillips must wake up to the fact that the court is a public institution like any other and is open to scrutiny and must be accountable. That does not diminish his or the court's independence.

Of course it's not just our own judges who kicking up a fuss. Thousands of judges and lawyers in France went on strike in objection to President Sarkozy's comments after a young girl was murdered following the release of a convicted murderer:


"When we let an individual like that out of prison without making sure that he will be followed by a parole officer, the judiciary is at fault," Mr Sarkozy said during a visit to Nantes, outraging judges upset by a lack of resources.

Sarkozy has a record of criticizing the judiciary for their perceived failures. But then every institution will have defects, even the French presidency. (To get a better idea of French judicial procedure try and see the excellent Spiral.) The judges are extremely annoyed that Sarkozy won't fund the system properly. For example:


When members of the judiciary in the town of Bobigny decided to join the strike on Tuesday, they pointed out that all seven of them 10,600 cases to deal with between them.

The British politicians they have been exercised by the European Court of Human Rights which has told the government that prisoners should be permitted to vote in elections. In a partiamentary vote--234 to 22--MPs declared the government should ignore the ECHR's ruling. The vote is non-binding.

Perhaps what was most galling was watching the previous Minister of Justice, Jack Straw, lead the revolt agains the government. This was the man responsible for introducing the Human Rights Act to the UK. This is also the man who supported regime change in Iraq and who is quite keen to lecture others on their failings.

The UK has effectively subscribed to the ECHR for 60 years now. And governments have followed its rulings despite their dislike. Now British politicians are arguing we should withdraw--that human rights have gone too far. But governments subscribe to international law and shouldn't be seen to abrogate it at will. (For a trenchant and compelling view of human rights see The Rights' Future.)

If the UK government doesn't comply, prisoners will sue for compensation. We could be looking at claims amounting to £100m.

In each of these instances justice and the rule of law are at the mercy of economy. Can we afford it? Do we want to pay for it? Is it worth it? Don't our politicians know best?

We're lucky in that we have stable institutions and although Lord Phillips might mutter darkly about his court's accountability, he will for all practical purposes continue as before relatively unfettered. Look elsewhere and the situation is less harmonious--Egypt for example. Justice is expensive but western societies have no excuses not to fund justice adequately. It's a public good that we all depend on and as the state grows ever more intrusive we need it more and more.
courts economy judges justice Supreme Court